I’m afraid I’m not in a position to crank this blog back into life in any sustained way just yet (though I will probably be posting a few odds and ends), but I will break the silence to make a trio of announcements (a couple days late for the Feast of the Annunciation, but oh well…).  If you know me on Facebook, you’ll already know all about the first two, so you can skip down to #3, which is all-new and hot off the press, so to speak.

First, I am proud to announce the birth of my son Oliver Aaron, born Sunday, March 23rd at 11:00 PM, and weighing in at 7 lbs., 9 oz., exactly the same as my first son, Soren.  He’s a handsome enough fellow, but he scowls a lot, with the air of someone indignant at being hauled out of his warm comfortable cave into the cold, hard world.  I am prognosticating that he will be the first of our children to display reclusive or anti-social tendencies. END_OF_DOCUMENT_TOKEN_TO_BE_REPLACED

Unfortunately, a series of unforeseen pressures on my time (some of them coming in the form of malevolent microorganisms) have forced me to abandon my blogging ambitions for this month; I still hope that next month will see a return to more writing here, but a number of academic writing commitments will get in the way.

However, I have not been idle, and I do have a number of publications that have just recently come out or are forthcoming.  Unfortunately, many of them you will need institutional journal subscriptions, a lot of money, or a good library to read, but someday, the open-access revolution may burst them out from the closely guarded paywall prisons in which they now reside.  The last and most exciting item, however, will be very widely and inexpensively available:

A review of Scott Kindred-Barnes, Richard Hooker’s Use of History in His Defense of Public Worship: His Anglican Critique of Calvin, Barrow, and the Puritans for the Journal of Anglican Studies.  Published online 9/27/13 here.

A review of A.J. Joyce’s Richard Hooker and Anglican Moral Theology for the Anglican Theological Review 95.4 (Fall 2013): 734–36.  Some of you will recall that I reviewed this book at length here last spring.  But if you want the concise version, in which my caustic criticisms are thinly veiled in polite academese, the journal review may interest you.

A review of Peter Leithart’s Between Babel and Beast for Political Theology 15.1 (Jan. 2014): 10–12.  Again, I have blogged about this book in a number of places, and reviewed it for Reformation21 last summer, but this is the concise, academic version.

A book chapter, “Bancroft versus Penry: Conscience and Authority in Elizabethan Polemics,” appearing in the very exciting new volume edited by W.J. Torrance Kirby, Paul’s Cross and the Culture of Persuasion in England, 1520-1640 (Leiden: Brill, 2014).  And trust me, it really is a very exciting new volume, bringing together historians, theologians, English literature scholars, architectural history scholars, etc. to paint a picture of the enormous cultural impact of the open-air pulpit outside St. Paul’s Cathedral throughout the events that laid the foundation for modern Britain and Anglophone Protestantism.  My essay looks at how the complex dynamics of authority in church and state, conscience, and Christian liberty played out in a sermon by arch-conformist Richard Bancroft and the published critique by John Penry in 1589-90.

An article for a more popular audience in a new journal, The Statesman, entitled, “Three Things Conservatives Could Learn from Richard Hooker.” Forthcoming Feb. 2014.

An article, “More than a Swineherd: Hooker, Vermigli, and an Aristotelian Defence of the Royal Supremacy” that will be appearing in Reformation and Renaissance Review 15.1 (April 2014): 78–93.  This is going to be a spectacular special issue of RRR, guest-edited by my friend Jordan Ballor and focusing on the life and thought of the great Florentine reformer Peter Martyr Vermigli.  My friends Eric Parker and Simon Burton also have excellent articles in this issue—indeed, so excellent that I’m a little embarrassed for my little contribution to be appearing alongside theirs.  My article looks at how, in an argumentative strategy that turns many stereotypes on their heads, both Peter Martyr Vermigli and Richard Hooker deploy Aristotle’s Politics and Nicomachean Ethics in order to establish a Christian monarch’s responsibility to care for and advance the church in his realm.  This realization carries lots of exciting implications for our understanding of early modern Protestant political theology, and also strongly suggests something I want to work out more fully in later research—that Richard Hooker was deeply influenced by Vermigli’s work.

There are a few other articles and book reviews I’ve got coming down the pipeline, but I don’t have a very good idea of publication dates, so I’ll leave those out, and skip to the big news… 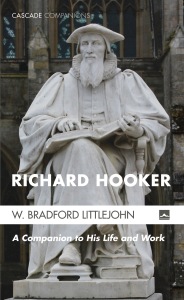 Richard Hooker: A Guide to His Life and Thought.  A new book in the Cascade Companions series, to be published by Cascade Books.  These are short (120-200 page) books aimed at a wide audience—students, pastors, church book studies, and more—that seek to introduce the work of important thinkers, texts, movements in the Christian tradition.  Cascade has just sent me the contract to write this, and I’m proposing to finish it within a year.

My provisional Table of Contents (with very pithy, very un-Hookerian chapter titles) at present is as follows

Stay tuned for more news, as this and other projects develop.

I have been on a blogging sabbatical for pretty much the last three months, I’m afraid, and I wouldn’t blame most regular readers if they’ve given up this blog for lost, especially as its last utterance was hardly a dazzling display of intellect.  But as the maelstrom of conferences and job applications is finally drawing to an end, I hope to resume some sustained blogging over the coming weeks and hopefully months.  However, the posts here are likely to be more personal, occasional, and aimed at my immediate community, as I devote my more public blogging energies to the various other fora in which I have been asked to write.  You will find monthly posts from me on current events at Capital Commentary, monthly essays on historical political theology at Political Theology Today, monthly book reviews at Reformation21, and hopefully regular contributions again at Mere Orthodoxy and The Calvinist International (as well as, Lord willing, essays at Humane Pursuits).

With all of that, I may not keep my promise of blogging here again for long, but I’ll at least make a start over Christmas break, with, among other things, a series of posts sharing delightful excerpts and insights from C.S. Lewis’s The Screwtape Letters, which I recently had the great pleasure of re-reading for the first time in several years.  Most posts will include some brief notes of application or elaboration, in addition to the quoted excerpt; in other cases, Lewis’s observations may serve as the occasion for more extended reflections of my own.  For now, one of the former, from the inimitable Letter #7, on pacifism and patriotism:

“All extremes, except extreme devotion to the Enemy, are to be encouraged.  Not always, of course, but at this period.  Some ages are lukewarm and complacent, and then it is our business to soothe them yet faster asleep.  Other ages, of which the present is one, are unbalanced and prone to faction, and it is our business to inflame them.  Any small coterie, bound together by some interest which other men dislike or ignore, tends to develop inside itself a hothouse of mutual admiration, and towards the outer world, a great deal of pride and hatred which is entertained without shame because the ‘Cause’ is its sponsor and it is thought to be impersonal.*  Even when the little group exists originally for the Enemy’s own purposes, this remains true.

We want the Church to be small not only that fewer men may know the Enemy but also that those who do may acquire the uneasy intensity of a secret society or clique.  The Church herself is, of course, heavily defended and we have never yet quite succeeded in giving her all the characteristics of a faction; but subordinate factions within her have often produced admirable results, from the parties of Paul and Apollos at Corinth down to the High and Low parties of the Church of England.**”

*”thought to be impersonal”—what a sharp observation and rebuke.  For too long in our evangelical circles have we comforted ourselves with the mantra that we “hate the sin but love the sinner.”  Oh, it’s the sin of homosexuality that we hate, not homosexuals or gay rights activists.  It’s Darwinism we hate, not Darwinists.  Socialism and liberalism we hate, not socialists or liberals.  We forget that to truly hate a sin while loving the sinner is a work of grace, against which so much of our sinful nature militates.  In reality, what generally happens is that we so adamantly hate what we take to be sin that we tell ourselves that no sane person could love something so hateful.  Those outside our small coterie, who espouse this deplorable doctrine, are thus scarcely to be considered rational beings, but are virtually blind brutes, and thus are not worthy to be patiently listened to, patiently talked to, or treated with dignity and respect.  All of this, of course, at a very unconscious level; few would ever come out and admit to such feelings.  At the same time, we have so convinced ourselves that pride is an essentially personal sin (more on pride in a later post), that it is always about having too high a view of my own individual merits, that we never pause to consider whether we are in danger of succumbing to that far more insidious and destructive corporate pride which was what Christ and the Apostles so rebuked the Pharisees for.  To be sure, some of them suffered from individual self-righteousness as well, but far more pervasive was their national self-righteousness, their conviction that they were God’s favored people, and all those outside were under judgment.  This kind of pride can co-exist with the most self-flagellating personal humility, and often does in contemporary Reformed and evangelical circles.

**And, one might add, down to the various micro-denominations among the American Reformed, who seem to have perfected this kind of factionalism into an art form.

Apologies to all for my inactivity these past couple weeks, which is likely to continue, I’m afraid, for another week or two.  I will be defending my Ph.D dissertation, “The Freedom of a Christian Commonwealth,” on October 2nd, and the demands of preparing for that, as well as travel, illness, and other responsibilities, have forced me to postpone completion of my Dismissing Jesus review, as well as most other writing, until at least after the defense.

I have written a couple items for other venues, however, which Id encourage you to check out.  One, “On the Follies of Contraceptive Historiography,” is a critique of Peter Lake and the sterile methodological orthodoxy he seems to impose on historical theology, and was recently posted at The Calvinist International.  Another, a two-part series on Edward Snowden, surveillance, and the “right to privacy,” will appear this Friday and next on CapitalCommentary.org.