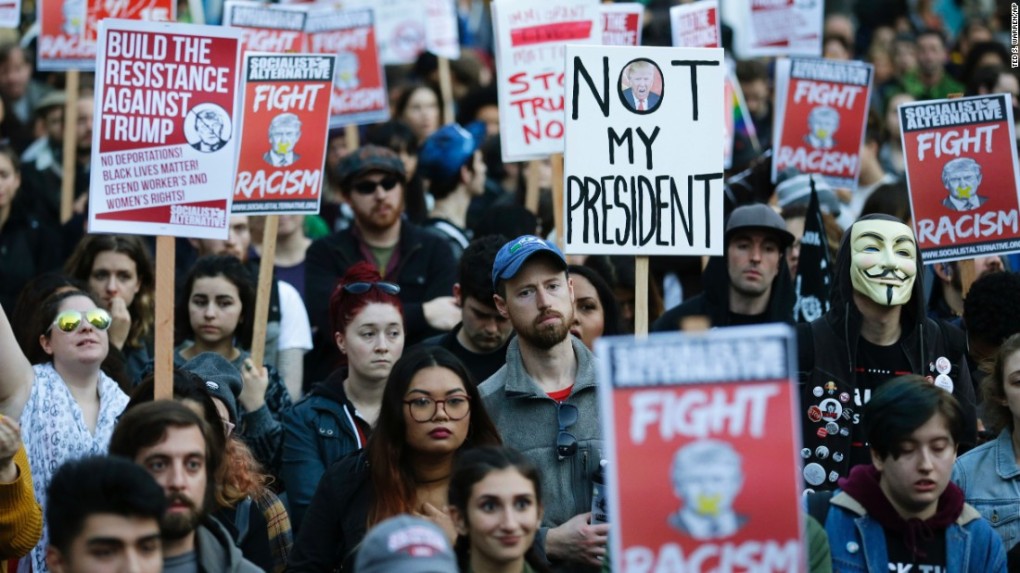 As Trump’s shocking campaign promises have given way to the even more shocking realization that he actually meant them, our country’s already fevered political polarization has intensified to the boiling point. This polarization, and its occlusion of the possibility for meaningful political discourse, is in my view considerably more dangerous than anything Trump himself is likely to do. Trump is, as Alastair Roberts has recently reminded us, much more a showman than a conniving dictator, and although his autocratic leadership style is sure to undermine the rule of law (ironically, the very “law and order” he claims to re-establish), those who worry about a repeat of Hitler’s Germany are, I think, giving Trump way too much credit. The Art of the Deal is not exactly Mein Kampf.

However, an individual leader is always considerably less dangerous than the mindset he instills (or helps capitalize on, or both) among his followers and the society at large. And the greatest danger for a political society, one that does tend to prove conducive to the emergence of totalitarianism, is the illusion of the binary choice: there are either two options here, and if you are not for X, you are against it. If you are not for me, you are against me. While such a binary choice is often real in the realm of truth, it is rarely so in the realm of politics. Demagogues, however, are a master of reducing the complexities of politics to the simplicities of the binary choice, and Trump is, in this at least, the arch-demagogue.

Up through Trump’s actual inauguration, though, most thoughtful conservatives seemed to be resisting the pull of Trump’s all-or-nothing framing—after all, nothing is more antithetical to the true conservative mindset (though this has become something of an endangered species in recent decades). Nothing has been so disturbing to me about the past couple weeks as how rapidly this seems to be changing. In true progressive fashion, many “conservatives” have reflexively greeted concerns about policy by changing the subject to questions of sweeping (often caricatured) principle. This was of course the standard liberal move during the Obamacare debate: “You think this isn’t good policy? Wait a minute—are you telling me you don’t care about poor people getting healthcare?” We are in danger of witnessing the exact same drama play out in reverse: “You think Trump’s executive orders aren’t good policy? Wait a minute—are you telling me you think that unrestricted immigration is a good thing and we should have totally open borders?” Of course, progressives are making this much easier by too often playing right into it, and voicing their opposition only in the shrillest and most sweeping terms of humanitarian sentimentalism.

Amidst all this, it is important to remember what a complicated and nuanced thing political opposition is, and in the manifold debates to follow in the coming weeks and months and years, to do others (and ourselves) the favor of rigorously distinguishing exactly which form we are facing or seeking to articulate.

Of any proposed policy, we must ask the following questions:

Political opposition can take the form of saying “No” at any one of these five points. And a “No” at any of these five points is a sufficient ground for taking a posture of political opposition. It is incumbent, however, on the part of the opposition to be clear as to which among these five questions they are saying “No” to. But it is equally incumbent on those who would say “Yes” to all five questions to do their various opponents the courtesy of trying to see where exactly their opposition lies. The greatest threat to political deliberation and ordered liberty is when the defenders of a policy or of a leader (often the most zealous defenders do not even bother to distinguish the two) insist on lumping together all naysayers as if they said “No” to the very first question. “These people don’t even think X (fill in the blank: poor people not getting insurance—women getting raped—terrorists getting into our country, etc.) is a problem. You don’t want to listen to people like that. People like that would destroy our country.”

Let me flesh out the relationship of these five a bit more to make sure my distinction is clear. And I will use both Obamacare and Trump’s executive orders as examples.

Question 1 asks whether there is really something wrong in the world that merits our concern on a particular issue. Should we be concerned about the fact that lots of people don’t have insurance? (Almost everyone would say yes, though there would be a few Randian holdouts who wouldn’t.) Should we be concerned about trying to keep potential terrorists out of our country? (Here, I think pretty much everyone would say “yes,” though there would certainly be disagreement about how far the category “potential terrorists” extended.)

But just because you say Yes to Question 1 doesn’t mean you necessarily say yes to Question 2. What’s the difference? Well, there are clearly plenty of things wrong with the world that are not policy problems. There are a lot of preachers that preach really bad sermons. This is a real problem with the world. A big problem. But it’s not one that political policy should try to fix. Even in establishmentarian 16th-cent. England, Richard Hooker pointed out that it was more of a “it’s a fallen world” problem than a policy problem. Or, to get more contemporary and controversial, what about domestic abuse? In part a policy problem, to be sure, but there is a great limit to how far the law can go in actually preventing and addressing such a deeply-hidden problem. On the examples before us, someone might admit that yes, in an ideal world, everyone would be insured, but that there were no good public policy options in 21st-century America for making that happen—or else that whatever options there were had already been put in place and the problem was as dealt with as it could reasonably be expected to be; thus the problem, while it should be lamented, should not be treated as a public policy problem. The same could be said on the immigration issue: yes, we don’t want potential terrorists in, but there’s not really more that could be done from a public policy perspective right now to help that problem further (either because it’s intractable as such, or because we’ve already done what should be done).

But suppose you admitted there was a real problem and it did admit of a real policy solution? Could you still have grounds for opposing a given policy? Well sure! You could just think that this is the wrong dang policy! That this would make matters worse, or at any rate would make them no better, or would simply be intolerably expensive, etc. There are a host of reasons that one could say, “Yes, we do need to do something about it. But no, we should not do what you are proposing.” This was, on the whole, the more intelligent conservative response to Obamacare—although it was undermined somewhat by the fact that they never seemed to get around to saying what should be done instead. It is of course rationally acceptable to say, “I know something is wrong with the proposed policy, even though I don’t have a better solution,” however, if that’s your line, you’d better get busy finding a better solution. Just so in the present case. There are plenty of people who even agree with Trump’s premise that we need to get tougher on immigration and refugee policy, but aren’t convinced that building a wall or the recent visa ban is going to be the most effective and efficient way to do it. Of course, if they’re going to maintain that line, they do need to try to put forward credible alternatives in due course.

But say you agree there’s a problem, agree there’s a policy problem, and agree that the proposed solution is, in the abstract at least, a good one. Could you still oppose it? Well sure—especially if you’re a conservative! We have, after all, a little technicality called laws, and in the US, a Constitution with separation of powers, etc. On Obamacare, some conservatives, particularly after the law was passed, focused their critiques on the point that regardless of whether one liked the idea of Obamacare, it violated various constitutional limitations. We do not have the leisure in this country of just implementing any old policy that we feel like would make the world better; it has to navigate a complicated system of checks and balances. Conservatives were loud in insisting on this under Obama, and now too many want to casually brush aside such considerations. Plenty of current objections to Trump’s immigration policies revolve not around the fact that there is a problem to be addressed or even necessarily whether the proposed policies might work—they simply point out that he does not have the authority to act in the way he is currently acting.

Finally, even if a proposed policy checks all these boxes—there’s a real problem, it can be addressed by policy in principle, the proposed policy does effectively address it, and the proposed policy is legally appropriate—a thoughtful conservative may still object. Why? Because policies never take place in a vacuum. Something could be the right thing to do, and yet not be the right thing to be done now, and by this particular guy. Perhaps because the enforcement mechanisms or funding for the policy are not yet adequately in place. Perhaps because popular support for it is anemic or public understanding on the issue is confused, so it is more likely to create a destructive backlash than do long-term good. Perhaps because it is important to wait until there is a broad coalition so that the policy not be seen as unilateral, entrenching partisan divisions and undermining public buy-in. These were all important objections to the way Obamacare was passed, and they are all potentially legitimate objections to President Trump’s actions, both those he has already taken and others he may take in the future.

If we are to avoid a paralysis of political discourse in this nation and hence turn the worries about a slide to totalitarianism into a self-fulfilling prophecy, it is critical for all sides in our political debates to remember these basic distinctions. Not all forms of opposition are identical, and defenders of Trump’s policies must resist the temptation to portray them all, and demonize them all, as if they were. Likewise, critics of Trump’s policies should not march right into this easy trap by shrilly protesting as if each and every policy were equally absurd, and for the same reasons. If their objection is simply that a policy is unlikely to work in practice, or ill-timed, or runs up against certain constitutional barriers, then they must articulate that case carefully and persuasively.

Granted, the current nature and incentives of our media institutions, and even worse, of the social media shouting chambers we have constructed for ourselves, make it rather doubtful that such thoughtful discrimination and deliberation will get much of a hearing, but that should not stop Christians from trying.

One thought on “A Primer on the Meaning of Political Opposition”