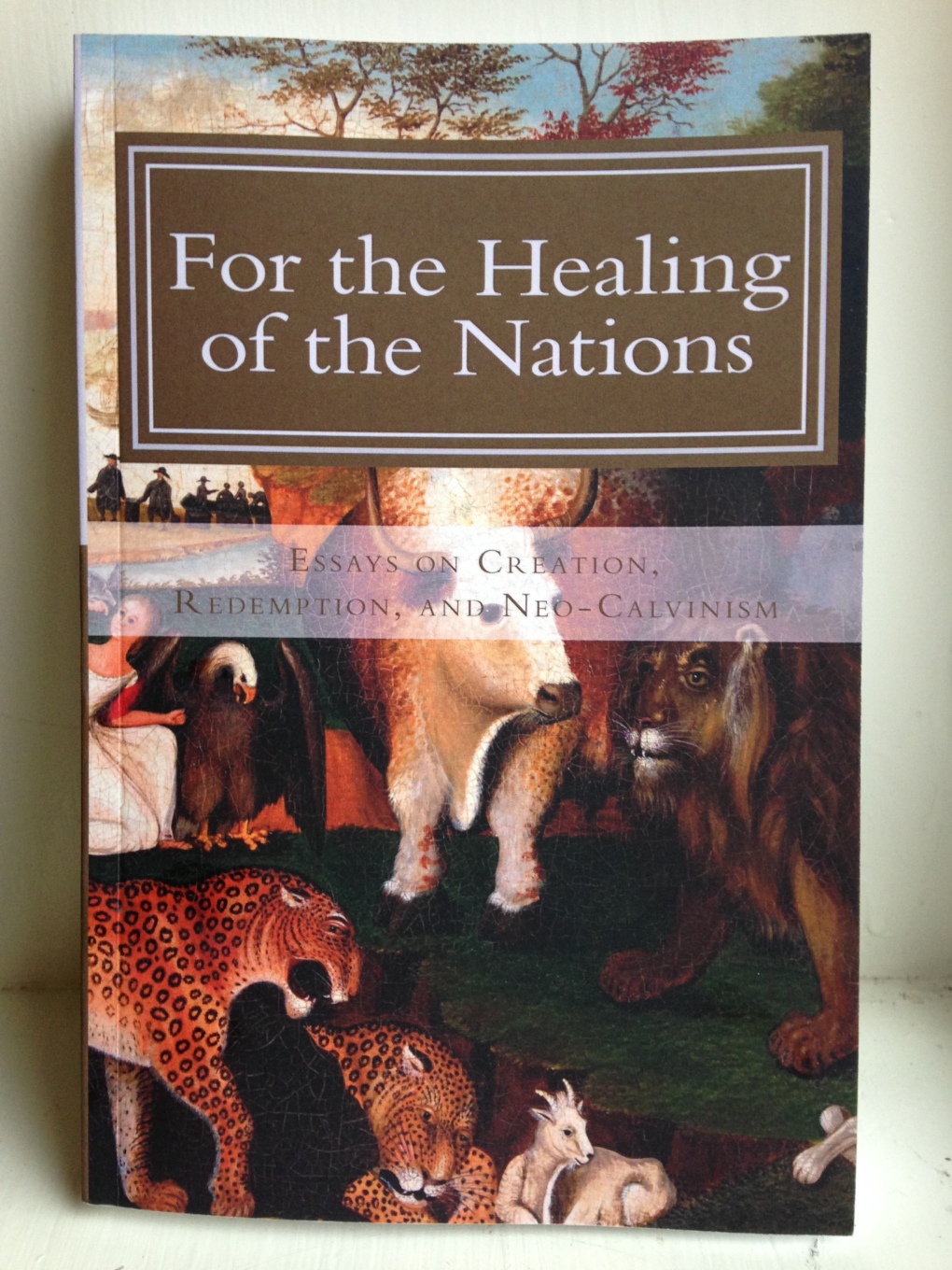 I am proud to be able to announce the recent publication of a volume that I have gotten to oversee from start to finish, For the Healing of the Nations: Essays on Creation, Redemption, and Neo-Calvinism.  Thankfully, I was fortunate enough to work with such a great team of contributors, turning in such high-quality essays, that on the basic editorial end of things, there wasn’t too much work to do.  These essays came out of the Convivium Irenicum conference in SC this June, the second annual event by that name, which is organized by the foundation I’m part of, the Davenant Trust.  Headlined by the eminent Prof. James Bratt of Calvin College, who gave us an in-depth orientation to the life and political thought of Abraham Kuyper, the conference featured a range of fine papers on topics ranging from the early Church’s confrontation with the pagan classics, through John Calvin’s political thought, to the variety of ways that contemporary “Calvinists” have sought to engage with the natural order and secular culture.

These have now been brought together in a fine-looking volume, introduced by my friend and associate, Peter Escalante, which promises to make a valuable contribution to contemporary Reformed debates on issues such as presuppositionalism, theonomy, two-kingdoms, sphere sovereignty, and infant baptism.  Copies are available in Amazon Kindle format, Google Books format (click on one of these two links to see inside the book), or in paperback via Amazon.  Copies will also be on sale at the Evangelical Theological Society meeting in San Diego next week.
http://www.amazon.com/gp/product/0692322183/ref=as_li_tl?ie=UTF8&camp=1789&creative=390957&creativeASIN=0692322183&linkCode=as2&tag=bradfolittle-20&linkId=X2LRL2KTYCPQ2AOS

I’d like to share, as a teaser, some paragraphs from Peter Escalante’s fine introduction to the volume:

The theme of the 2014 national Convivium was “Creation, Redemption, and Neo-Calvinism.” As it turned out, the participants decided to take this primarily as a noun rather than a verb; thus in the sense of “cosmos” or “nature.” The lectures given at our symposium of this year all revolved around this theme in some way or another, and they dealt with widely various aspects of it. This topic is obviously one of the first things, but it is also one of the last things since the world to come is also, by definition, creation. The simple truth that it is so is incontestable since the neither the world to come nor those whose dwelling it is built to be are God. But the way in which this is so is the subject of a long, long debate in Christendom, with the question of whether and in what degree the life to come is continuous with this one. How common is the “thing” in “first thing” and “last thing”? Obviously the world to come cannot be continuous with this one with respect to its sin or the flaws which follow from that. But if it cannot succeed it in defect, will it yet succeed it in substance? And how much? And in the meanwhile, what is our nature, and what can it, and what ought it, do with the world with which it is, of course, one flesh? The verbal sense of “creation” reappears here as the question of what Dr Tolkien called “subcreation,” the participation of mankind in God’s providential development of his world.

Although the Lord wouldn’t suffer the (badly-intended) question of the Pharisees regarding which of her several husbands a woman would be married to in the world to come, we are fools if we do not suffer the earnest inquiry of countless children from the beginning of Christendom: Papa, will my dog be in Heaven? Like many childish inquiries, is not at all mere child’s play as a doctrinal question. It is simply one of many naturally arising instances of a wider and very difficult topic, the answer to which will necessarily be much the same as that to the question Dr Schaeffer left us and which our circles have taken up again: how then shall we live? Eschatology is protology and vice versa, and in the stars of the revealed Word stretching between the the Alpha and Omega horizons, the divine directives for our our dwelling—even if that be just be for the night, in what is always a pilgrimage and sometimes perhaps even a flight—must be faithfully read and followed.

So the question is a very ancient one. Is the world, at its heart, Eden or Egypt? Are we in exodus, or do we dwell in the Land? Or is exodus the only way to genuinely dwell—is the world only a land of promise, an extended Eden, for those who know they are pilgrims in transit toward God? Do we till the world or flee it? And if we flee it as Egypt, what of the golden spoils? And to which land are we taking them? Is the City of Man always a Tower of Babel, or can it be a tabernacle city?

In the 19th century, this sense of opposition would be figured, primarily by the unhelpful Matthew Arnold, as Hellenism and Hebraism, a false dichotomy which is still unfortunately with us and whose victims, once having a chosen a side, all too often do their best to impersonate the other’s caricature of them.

The ancients seem to have worked with a similar rhetorical opposition, but things are not with them quite as they seem. For one thing, they did not oppose Hellenism to Hebraism, though they sometimes sound as though they do. But Hellenism and Hebraism are modern categories. In fact, they consistently range against each other not Hebraism and Hellenism, but rather, Christian Scriptures and religion against pagan scriptures and religion, that is, they oppose two different integral and architectonic claims, not two cultural legacies.

A famous example of this is considered by Dr Eric Hutchinson of Hillsdale College, who in his “And Zeus Shall Have No Dominion: Literary ‘Transformationalism’ and the Plundering of the Egyptians in Christian Late Antiquity” turns a trained eye to the case of Jerome’s dream in which he was castigated for his study and use of the classics and, under divine duress, made a spectacular renunciation. Dr Hutchinson discovers that a closer look at Jerome’s famous renunciation reveals that what Jerome really renounced was not the texts of Plato and Aristotle altogether, but rather a certain kind of studium, which is to say, disproportion of place given the classics relative to the divine wisdom of the sacred scriptures.[1]

Given the antiquity and centrality of the question, the status of creation was unsurprisingly one of the great debates of the Reformation time. Very broadly speaking, the evangelicals of the Reform asserted the goodness of original nature in principle, and took redemption to be about getting nature back on track toward its primally intended maturation, whereas the Papalists stood for the primacy of supernature in principle, and took redemption to be about the restoration of the gift of supernature. Decidedly different ideas about the pattern of Christian life in this world followed from these different from principles.

Along with the “political Hebraism” of the Reformation, lately noticed by academics, we might speak too of a project of “cultural Hebraism,”  a Lutheran and finally pan-Protestant embrace of precisely the “carnality” of creation which in the two-tier Roman schema had and has, despite its empty propaganda about sacramentality and “incarnation,”  a decidedly inferior and dangerous character compared to “supernature.” [2] But the disputes were not entirely between Papalism and the Reform. There were disputes within Papalism about first and last things, and disputes among Protestants about them too.

And there still are.

“These essays serve helpfully to advance several important conversations occurring today on a number of fronts within Reformed theology and life. The subject range is broad enough to attract a wide range of participants into the conversation, and the comprehensive attention given by each author is sufficient to lead readers deeper into the relevant sources. But let the reader be warned: the history of ideas, including theological ideas, is neither as linear nor as univocal as we are often led to believe. In these essays you will encounter a number of iconoclastic claims, which simply means that you will be given the opportunity to join an expanding community of those who now have something more to think about. Enjoy!”

One thought on “Introducing For the Healing of the Nations”