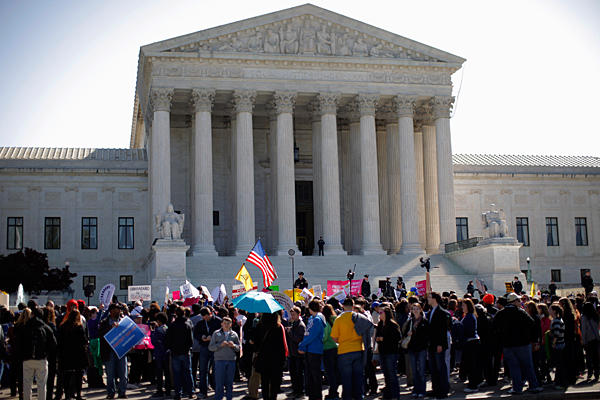 Last week, flush with the successful defense of my Ph.D, disgusted with the news I heard trickling out of my country, and tickled to re-discover the perennial relevance of Richard Hooker’s political wisdom, I lobbed a 2,500-word grenade 3,500 miles across the pond, exposing the stubborn self-indulgence of the GOP’s stance vis-a-vis the government shutdown.  Hooker’s message struck a chord with many readers, but also elicited some predictable protests.  Since returning to my homeland a few days ago, I have immersed myself in the resulting discussions, and in reading whatever would shed light on the current fiscal crisis.  The situation, of course, is too complex, too rapidly-evolving, and too obscured with duplicity and half-truths, to offer anything like a full statement on the debate here.  Indeed, in a salutary development, the posture at which my post last week was aimed—demanding the overthrow of Obamacare—seems to be being rapidly abandoned by Republican leadership, to the outrage of the hard-right agitators who were dictating terms until recently.  It remains to be seen whether the new direction will hold momentum, and if so, whether it will mark the final abandonment of the Obamacare fight by conservatives—though I am doubtful they are ready to throw in the towel just yet.  Inasmuch, however, as the Obamacare question continued to dominate discourse up through early this week, and remains an extremely live issue in many conservatives, I want to use the following trilogy of posts today to expand upon my “Open Letter from Richard Hooker,” clarifying the object of my critique and to answer some common rejoinders I have received.  (Some of the same principles, incidentally, apply to the broader budget-deficit concerns which now dominate debate, but I will leave it to readers to draw those applications).

In applying the passage from Richard Hooker to the current debate, there were three points in particular I sought to emphasize, all related to the insistence that all parties to the debate agree to operate from the premise that the Affordable Care Act is in fact the law of the land.  Since its passage in 2010, a legislative process that the Right basically boycotted (though this is not to absolve the Left of their tactics in the passage of the bill), the Right has seemingly hoped that by acting as if the law had not been passed, it could make this charade into reality.  Accordingly, state legislatures and governments have refused to put the law into effect through the state-by-state structures envisioned, thus paradoxically fulfilling their very own prophecy of a centralized top-down imposition by the federal government.  For long, many on the Right assumed that anything so self-evidently evil would be overturned by the Supreme Court, and so insistently did they repeat this to themselves that when, in point of fact, it was upheld, many seem to have remained blissfully unaware of the fact (up to 44% of the US population, recent polls have shown).  Others determined that, as the date of the law’s implementation drew near, they could use a routine appropriations bill and debt ceiling increase as a bargaining chip to overthrow or at least delay the law.

In principle, of course, the Congressional power of the purse means that Congress can in fact refuse to fund programs that it considers detrimental to the good of the country (though I will have more to say about the appropriate and inappropriate uses of that power below).  But what troubled me particularly was the rhetoric, which continued to treat the Affordable Care Act as an open question up for continual negotiation.  To campaign for repeal or delayed implementation would in principle be legitimate, but as Hooker insisted,

“inasmuch as ye go about to destroy a thing which is in force . . . and to overthrow those things whereof we are possessed; that therefore ye are not to claim in any such conference other than the plaintiff’s or opponent’s part, which must consist altogether in proof and confirmation of two things: the one, that our orders by you condemned we ought to abolish; the other, that yours we are bound to accept in the stead thereof.”

In other words, in the case of a law passed by the legislature, signed by the executive, upheld by the judiciary, and endorsed as it were by referendum by the electorate in the 2012 presidential election, a very high burden of proof is necessary for those who would still seek to overturn the law.  Inasmuch as this proof would have to consist primarily of evidence that the law as a whole was in fact deeply harmful to the common good, such a case would (if accurate) be much easier to make after the law had in fact been in force for a couple years.  I understand that the Right is worried that once in force, the law will be impossible to overturn, but this worry ill comports with their insistence on how transparently and overwhelmingly harmful the law will be.  If it proves that bad, then the case for subsequent reform will be easy to make.  Moreover, again following Hooker, it is not enough to insist that existing orders ought to be abolished—the burden also lies on the Right to prove “that yours we are bound to accept in the stead thereof.”  Unless and until the Right comes up with their own meaningful healthcare reform proposals, they have little or no business insisting on the repeal of those currently in force.

Another problem with the Right’s rhetoric in the current dispute has been the insistent “us vs. them” posture.  Both parties, no doubt, bear considerable responsibility for the current climate of polarization, and it is of course true that the Affordable Care Act was passed without a single Republican vote (though whether that reflects worse on the Democrats or on the Republicans is hard to say).  But the fact remains that a law passed by elements of the legislature that you disagree with is still a law passed by your legislature, by our legislature.  From the standpoint of political philosophy, the legislation passed by Congress is not something done by them to us, but something done by us.  “A law is the deed of the whole body politic, whereof if ye judge yourselves to be any part, then is the law even your deed also,” says Hooker, in what I would call one of the most important lines of his entire Lawes.  Accordingly, we are bound to be obedient to it until such time as we succeed in making our case for its suspension or repeal; we do not have the liberty of withholding our consent until we get our way.  This, I take it, is part of why Obama has taken such a firm line in refusing to negotiate against the backdrop of a debt-ceiling vote.  To enter into negotiations with the Republicans on the terms of the original ultimatum, at least, would be tantamount to granting a portion of the body politic the right to pick and choose which laws to accept as binding; the law having at this point passed every Constitutional barrier, any subsequent negotiations must take place within the context of mutual acceptance of the framework of existing law.  Again, Hooker:

“haply they whose authority is required unto the satisfying of your demand do think it both dangerous to admit such concourse of divided minds, and unmeet that laws, which being once solemnly established are to exact obedience of all men and to constrain thereunto, should so far stoop as to hold themselves in suspense from taking any effect upon you till some disputer can persuade you to be obedient.”

The last point was to highlight how important it was for public order—the maintenance of which is usually understood to be a “conservative” position—to not treat laws as endlessly negotiable.  Hooker argues that often, in fact, less harm is done by keeping a bad law in effect than by overturning it, since overturning it will usually be expensive, difficult, and undermine the stability of the social order, public confidence in leaders, etc..  Even worse than overturning a law, though, is continuing to hold it in suspense, treating it as an open question whether it will or will not be in force.  The purpose of law is to draw boundaries, to define what is and is not permissible, to define the lineaments of the body politic.  The body politic can still function reasonably well in the absence of agreement about whether the law is or is not good, but it cannot function properly in the absence of agreement about what the law is and is not.  For this reason, it is important for societies to have some “definitive sentence” to which all must submit, even when they disagree:

“But of this we are right sure, that nature, Scripture and experience itself, have all taught the world to seek for the ending of contentions by submitting itself unto some judicial and definitive sentence, whereunto neither part that contendeth may under any pretence or colour refuse to stand. This must needs be effectual and strong. As for other means without this, they seldom prevail. . . . Are ye able to allege any just and sufficient cause wherefore absolutely ye should not condescend in this controversy to have your judgments overruled by some such definitive sentence, whether it fall out to be given with or against you; that so these tedious contentions may cease? . . . For if God be not the author of confusion but of peace, then can he not be the author of our refusal, but of our contentment, to stand unto some definitive sentence; without which almost impossible it is that either we should avoid confusion, or ever hope to attain peace.”

In the case of the US, this is the decision of the Supreme Court.  It was for this reason that I rejoiced last year when the Supreme Court upheld in substance the Affordable Care Act—not because I thought it was a piece of good law (far from it!), but because I thought the nation would at last be able to move beyond the question of whether it was in fact law, and, by living under it, could forward with proposing concrete reforms to improve upon it.  That the Republican Party has proven unable to do so proves, to my mind, that it has lost the sense of what it means to be a body politic, and has, in thoroughly anti-Conservative fashion, bought into a Randian fantasy of a war of all against all.

But what if what we are witnessing is not a “war of all against all,” but a wonderful demonstration to the world of what democratic government, with checks and balances to restrain federal power, looks like?  So some have argued, and I will tackle this in my next two installments later today.