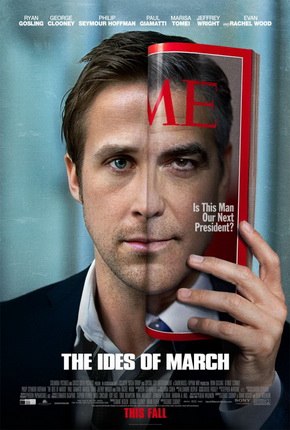 In chapter 17 of his Tractatus Theologico-Politicus, Baruch Spinoza remarks: “Those who administer a state or hold power inevitably try to lend any wrong they do the appearance of right and try to persuade the people that they acted honourably.” Seemingly trite and obvious perhaps, at first, but on reflection, a shrewd observation about the deep roots of corruption that seem almost inescapable in the business of politics. The perpetual peril of the truth and the seeming inevitability of corruption in politics are the theme (or one of the themes) of the remarkable recent film, The Ides of March (don’t worry, I’ll avoid spoilers).

The uncomfortable insight of this movie is that political corruption does not come about simply because all politicians are self-interested bastards (though they are often that), but is, on the contrary, something into which many find themselves sliding almost by accident, despite the best intentions. The truth, it turns out, is too dangerous a thing for the business of politics, and to succeed, you must learn to hide it. As Spinoza realized, it is fatal for any leader, no matter how good a leader he may otherwise be, no matter how wise his policies, to show signs of moral weakness. Image is everything, and character is essential to image. The masses, and nowadays, the media, are hungrily waiting for any misstep, any chink in the armor of apparent virtue, and they will pounce without mercy. When this happens, penitence is no use, it is too late. The people do not want to see in a leader a man like them, someone with many faults, but sincerely regretful for them–they want to see a pillar of virtue. So the only choice for a politician who wishes to succeed is to conceal any faults, to lend to any wrong the appearance of right and try to persuade the people that he has always acted honourably. This, at any rate, is the common wisdom, and this is the tragic dilemma that The Ides of March explores.

The tragedy of it is that it seems to render almost impossible the task of a sinful person who wants to achieve real good for his people in a position of political leadership. Convinced that his policies are for the greater good of his people, the leader will feel that it is imperative that he be elected–not because of selfish ambition (or not mostly), but because of genuine desire to make a difference in people’s lives. But unfortunately, he can only be elected not on the strength of his policies and his vision, but on the strength of his image. And if he is a sinner like everyone else, his true image, his real character, will not be enough–no one can handle the vices that they tolerate in themselves made visible in another, particularly a would-be leader. Almost by necessity, then, he must begin to cultivate a false image, and it is here that, almost imperceptibly, truth begins to take a backseat to expediency. As the pressure increases, as the media digs around for a juicy angle, scandals (whether real scandals, or else mere trivial mistakes that can be milked for much more than they’re worth in the headlines–the Ides of March features both) will threaten to surface, and the leader will face a choice–be completely open, and risk losing the chance to make a real difference, risk handing over leadership to an opponent who is morally or intellectually inferior, who will do incalculable harm, or else hide the truth, twist it, reinvent it. Once the bridge has been crossed, and truth is sacrificed to expediency, it becomes almost impossible to go back–the conscience becomes seared, and truth must always be condemned to a marginal position.

Although we are often tempted to identify the evil of the state in its dependence on the means of violence, in its wielding of power and domination, and reflexively wonder whether the Sermon on the Mount doesn’t render this whole business illegitimate, perhaps we are looking in the wrong place. Perhaps the essential vice of the political is deception–the inability to ever tell the truth, the whole truth, and nothing but the truth, and the essential Christian challenge to the whole business is the imperative to walk in the light and speak the truth. I recall, when first seeing the film The Dark Knight, being impressed by the apparently powerful Christian symbolism of its ending, as the Dark Knight determines to take the evil of another on himself, to become the scapegoat and endure the people’s wrath for their sake. But a friend pointed out to me that this could only in fact be a parody of Christ’s sacrifice, because this act rested on the necessity of deception–on the principle that the truth is too much for the people to handle, too dangerous. Whereas Christ by his death and resurrection unmasks the nature of evil, unmasks the deception that upholds the powers and reveals the truth about us and about himself, the best that the Dark Knight can do is to perpetuate a lie to sustain the common good. In his case, admittedly, this lie is to his own hurt, not for his own protection, as in The Ides of March, but the ultimate Machiavellian principle–that truth cannot serve as the foundation for political life, only deceit–remains the same.

All this leads me to wonder whether perhaps the ultimate contribution that Christianity has to make to politics is the sacredness of the truth. What would it be like if Christians resolved to enter politics determined always to tell the truth, even to their own hurt, even to what might seem at first to be the hurt of the common good–even when telling the truth might seem to help advance the agenda of their enemies. What if Christians entered politics ready to be completely frank about their own faults and failures when necessary, to repent openly and ask the people’s forgiveness, and if that was not forthcoming, to let themselves be swept from power? What if Christians determined that, if the only way to pass a law they wanted passed was to resort to propaganda, twisting the truth and hiding it, then they would accept failure. Such political action would be an act of faith indeed, trusting that God would reward the truth by means surpassing the ordinary course of human affairs, since in the ordinary course of affairs, such a policy could never meet with anything but failure. It would also need to stem from a conviction about the provisionality of political affairs, their ultimately secondary or tertiary importance–only thus would it be willing to accept defeat so frequently on the political battlefield in the name of truth.

And yet, the realist will respond that this is fatal idealism. If the policies we want to advance really matter, then we are not loving anyone if we behave like meek little lambs, offering our throats to the wolves; sure we must be harmless as doves, but we must also be wise as serpents, and that means not airing all our dirty laundry, it means knowing when to keep our mouths shut, knowing how to mislead without actually lying, knowing how to project an image that will command respect, even if it’s a somewhat artificial image. In any case, the realist will argue, when it comes to international affairs, deception is essential. You don’t tell all your enemies abroad all your intentions, all your secrets; in fact, especially in wartime, you will intentionally mislead them. So we simply can’t engage in politics if we’re inclined to be all puritanical about truth-telling–prudence, not honesty, is the pre-eminent political virtue.

I do not have the answer to this dilemma. I merely pose it as what I increasingly think is the central dilemma that a Christian account of politics has to wrestle with today–not violence, not power, not inequality, however important those issues are. This question of truth is a question of what kind of people we will be, as we engage in politics, and this will determine everything else.

2 thoughts on “Politics and the Peril of Truth”